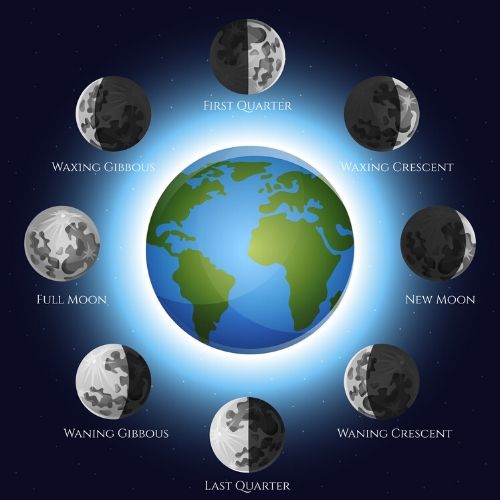 A 10,000-year-old lunar calendar has been discovered. It’s a row of slightly arcing pits found in Aberdeenshire, Scotland, which may be the oldest Moon calendar in the world.

The Warren Field Site is an important archaeological site that shows people coming out of the ice age were tracking the heavens, especially the moon and the Lunar year.

Does this have any related connection to the series of arcing pits recently discovered around Stonehenge?

A series of huge pits were dug by Mesolithic people to track the cycle of the Moon.

Archaeologists excavating in Scotland have revealed what they believe to be the world’s oldest lunar calendar.

They found a series of twelve huge, specially shaped pits designed to mimic the various phases of the Moon.

The holes aligned perfectly on the midwinter solstice to help the hunter-gathers of Mesolithic Britain keep precise track of the passage of the seasons and the lunar cycle.

The scientists believe that the dawn of timekeeping stretches back far further than the emergence of the earliest formal calendars in around 3,000 BC.

It shows that hunter-gatherers were watching the skies. And at approximately 10,000 years old, these unique lunar-cycle-marking holes in Aberdeenshire are by far the oldest lunar calendar ever discovered.

They even pre-dated by several thousand years the Bronze Age monuments in Mesopotamia that until now, they had had that distinction.

The Mesolithic hunter-gatherers, operating in Britain between 10,000-4,000 BC, would have benefited enormously from predicting seasonal change with accuracy.

The holes were dug in the shapes of various phases of the moon. “Waxing, waning, crescents, and gibbous, they’re all there and arranged in a 50-meter-long (164-foot) arc.

The one representing the full moon is large and circular, approximately two meters (roughly seven feet) across and placed right in the center.

And this arc is arranged perfectly with a notch in the landscape where the sun would have risen on the day of the midwinter solstice about 10,000 years ago.

Placing their calendar in the landscape the way they did would have let the people who built it to recalibrate the lunar months every winter to bring their lunar calendar in line with the solar year.

This means that any effort to keep track of the seasons using the moon alone will slowly drift ever further from true. An observer needs to know when to add or subtract an extra month to make good the time or hit the reset button and start counting again.

And this is something they seem to have done because the geophysical evidence suggests the holes had been maintained. And periodically reshaped many dozens, perhaps even hundreds, of times over the following millennia until at last the lunar calendar-monument seemed to fall out of use around 4,000 years ago.

Maintaining Track of Time and The Seasons.

While it may sound difficult, once a group has acquired this knowledge, it is comparatively easy to construct a monument with a built-in reset switch.

Maintaining track of time and the seasons would have had tremendous significance for the hunter-gatherer societies of Mesolithic Britain for both economic and cultural reasons.

Whatever drew these groups together, be it ritual, an excuse for a party, or early networking opportunities based around marriages and alliances, the timing would have been everything.

Such gatherings needed to occur when the local area’s natural resources were sufficiently bountiful to support an influx of extra mouths to feed.

Notwithstanding this modest scale, monuments substantial enough to scar the earth are typically seen as the creation of settled farmers. Rather than traveling bands of hunter-gatherers, forced to keep moving as natural resources were exhausted.

It shows that Stone Age culture was far more sophisticated and complex than we have previously believed.

The holes themselves were first found by aerial photography in 2004. Still, it was only recently—using the latest-generation remote-sensing technology. And uniquely created software that worked out the exact positions of sunrises and sunsets in the landscape around 10,000 years ago—that their importance was recognized.

That’s it, thanks for reading this article. If you want to know more about our only satellite, the Moon, then head over to this article named; Moon Facts – Interesting & Strange Facts About The Moon.