Tardigrades On The Moon – New Hope For Life in Space 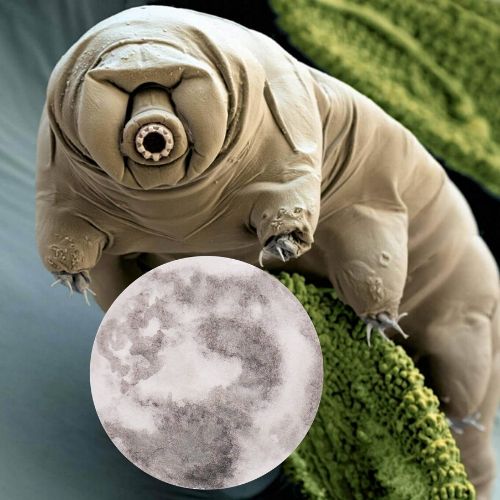 Are There Thousands of Tardigrades on The Moon?

A recent effort at placing a lander on the moon by the nonprofit Israeli SpaceIL organization failed. It tried to softly deposit a lander called Beresheet on the lunar surface on April 11, 2019.

And it seems to have been carrying a set of thousands of dehydrated tardigrades as passengers.

And, when Beresheet smashed onto the moon, it was carrying a novel container of human history and information, with a gathering of human DNA samples. It was in the form of hair follicles, blood, and tardigrades.

Tardigrades, the small “water-bears,” are exceptionally resilient life-forms. And for astrobiology, scanning for life beyond the Earth. One of the greatest challenges in our solar system is to evade creating false-positives by allowing terrestrial biomarkers or actual physical organisms into an alien environment, whether Mars or the moon or elsewhere.

There is also a reasonable consensus that we don’t want to mess up any alien ecosystems. Especially if they might be sensitive and exposed to invasive life.

After the dawn of the space age, there have been globally vetted rules and broad agreements about this kind of planetary protection. But it is a complex undertaking.

We know that our attempts to sterilize spacecraft are flawed. And we know that human space travelers are an immense potential cross-contamination dilemma.

On the moon, there are now around 100 baggies of astronaut poop, from the Apollo Moon mission landings. And if the far-flung aspirations of SpaceX are ever achieved, we will see hundreds, possibly millions, of tiny microbe-oozing humans deposited on the surface of Mars.

None of this seems helpful when viewed through the lens of astrobiology’s search for other life-forms. But we know that nature has been active in cross-contaminating worlds for the past four billion years. And tough little critters like tardigrades have probably already been deposited far beyond our own planet.

Furthermore, the mechanism involves asteroid impacts and the so-called impact ejecta. An extensive article exists on both experimental and theoretical work tracking the probabilities.

The bottom line is that significant asteroid impacts, i.e., roughly one-kilometer diameter objects and up, tend to shed surface material stuff from a planet and eject some of it with escape velocity or higher.

And it seems that microbial life and robust organisms like tardigrades have a fair chance of withstanding the pressure and temperature extremes throughout these shockingly forceful launches.

Huge impacts can send billions of centimeter-scale parts from the surface of the Earth out and crossed the solar system.

Some of those parts may take thousands of years to plummet onto other planetary bodies, meandering their way through an invisible web of orbital pathways, but in the end, they will get there.

Computer modeling of impact ejecta implies that even far-flung places like Titan neighboring Saturn should—albeit seldom—be receivers of pieces of Earth over time. Places like the Moon, or Mars, get far more debris.

From the point of view of trying to find clues to the deep history of life on Earth, this kind of lithopanspermia is interesting. The microbes may well be that spread across the lunar surface are fossil-like samples taken sporadically during life’s terrestrial history.

It is also probable that there are examples, even if millions of years old, that hold naturally dehydrated creatures like the tardigrade. And, it is also likely that there is a felicitous ecosystem on Mars populated by descendants of life from Earth.

Furthermore, there have also been several debates about whether life on Earth got its origins elsewhere before being brought here by impact ejecta. We’re presumably a long way from grasping the answer to that.

But it is likely that any life-form in our solar system has spent the preceding few billion years in a lively game of natural cross-contamination, blending it up on a regular basis.

So, does any of this suggest it’s a good idea to be impetuous about throwing terrestrial biology onto places like the moon? Absolutely not, we should tread carefully. So, but like all things, there has to be a balance between big ideas, science, exploration, and a sense of cosmic principles.

Tardigrades, which live on all continents on our planet, are maybe also living on the moon. All this following the crash of a lunar lander carrying thousands of the tiny microscopic water bears.

And did any of them survive the lunar impact? If they did, what happens to all of them now?

When the microscopic tardigrades were put on the Israeli moon mission Beresheet, they were in a tun state. Dehydrated, with their chubby heads and limbs retracted and all their metabolic activity temporarily halted.

The Arrival on The Moon

The tardigrades’ arrival on the moon was unexpectedly explosive; Beresheet’s crash landing on April 11th May has spread the microorganisms onto the Moons surface.

The small and tubby tardigrades are notoriously sturdy, but were the Beresheet tardigrades tough enough to withstand that impact? It’s absolutely possible that some of them made it to the lunar surface intact.

Is anyone in trouble for unintentionally spilling the microscopic tardigrades on the moon? That is a complicated question, but the short answer is absolute no.

Large space agencies from around the world follow a decades-old treaty about what is permitted to leave on the lunar surface, and the only specific prohibitions are against weapons and experiments or tools that could conflict with missions from other space agencies, according to the 1967 Outer Space Treaty.

In the decades that succeeded the treaty, other guidelines were formed that recognized the risks of seeding other worlds with microbes coming from Earth. And these requirements outlined methods for sterilizing mission equipment to elude contamination.

But even though large space agencies typically understand these rules, there is no separate entity enforcing them globally, Live Science previously reported.

Experts have yet to find any confirmation that the moon ever hosted living organisms other than touring astronauts and microbial hitchhikers from our own planet that could be threatened by microscopic intruders.

Nevertheless, contamination could carry severe consequences for missions to other planets where life might yet be found, such as Mars. Experts suggest that one possible consequence of colonizing Mars could be the extermination of indigenous microbial life-forms through exposure to bacteria from Earth.

Furthermore, it is possible that even before the Beresheet tardigrades impacted the lunar surface, additional forms of terrestrial microbes were previously there: like gut bacteria in abandoned bags of Apollo astronaut poo.

It would be very surprising if scientists couldn’t culture a few things out of the center of that freeze-dried poo. Especially spore-formers because they make a very thick outer layer of their spore proteins that are known to protect them against dehydration and radiation and also a variety of other things.

Tardigrades withstand conditions that would kill most other organisms; they do so by ousting the water from their bodies and creating compounds that protect and seal the structure of their cells.

The tiny creatures can reside in this so-called tun state for months and still awaken in the presence of water; scientists even resuscitated two small tardigrades from a thirty-year long freeze in 2016.

As a tun, a tiny tardigrade can endure freezing, boiling, high pressure, and also the vacuum of space, the ESA, or the European Space Agency reported in 2008, after sending the little water bears into orbit.

UV radiation turned out to be the microscopic tardigrades’ kryptonite, as few of the creatures endured full exposure to Ultraviolet light during the European Space Agency experiments.

And this could be great news for the desiccated Beresheet tiny tardigrades. Because, if they arrived in a spot on the lunar surface shielded from Ultraviolet radiation, the small creatures might stand a chance of survival.

Still, as long as the tiny tardigrades remain on the lunar surface, their odds of spontaneously awakening are very low. Because, without liquid water, the microscopic creatures will continue in a tun state, and while there are signs of ice on the moon, liquid water is nowhere to be seen.

Even if the tiny lunar tardigrades did somehow find liquid water while still on the lunar surface. Without air, food, and moderate ambient temperature, they wouldn’t last particularly long once they awakened. This is according to Kazuharu Arakawa. A tardigrade scientist working in the Institute for Advanced Biosciences at Keio University in Tokyo.

So, finally, as much as I would love to see the establishment of the Moon Tardigrade Republic, I don’t think that’s going to happen.

That’s it, and I hope you enjoyed this article about the sturdy and robust small creatures named tardigrade.

If you want to know more about our fascinating neighbor in space. Then head over to this interesting article: Super Moon 2020 – New Strange Facts Revealed.