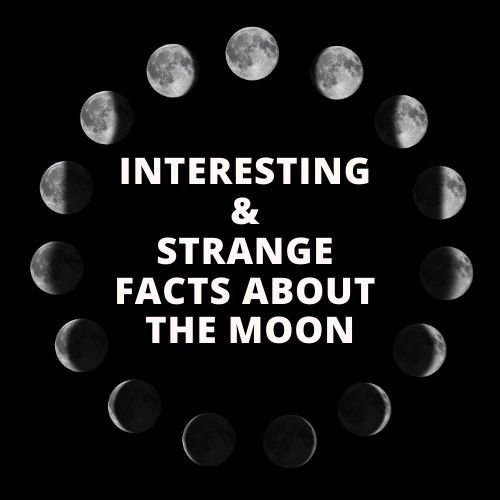 Moon Facts – Interesting & Strange Facts About Our Moon. Learn More Below. The Answers Here Will Surprise You.

The Moon is the Earth’s only satellite, also called the Luna. And it was formed 4.6 billion years ago. Around 30 to 50 million years after the creation of our solar system. Our Moon is in almost complete synchronous rotation with Earth. It means the same side is always facing the Earth.

Fun facts, the first unmanned mission to the Moon was in 1959 by the Soviet Lunar Program, with the first manned landing being Neil Armstrong, Buzz Aldrin, and Michael Collins Apollo 11 in 1969.

Fascinating Facts About Our Moon

Our Moon is Drifting Away From The Earth.

Therefore, the Moon is moving out of Earth’s orbit about 3.8 cm every year. It is estimated that it will proceed to do so for around fifty billion years. And by the time that happens, our Moon will be taking around 47 days to orbit the Earth rather of the current 27.3 days.

The Dark Side of The Moon is a Myth.

In reality, both sides of our Moon sees the same amount of sunlight but only one face of the Moon is ever seen from Earth. And this is because the Moon rotates around on its own axis in exactly the same time it takes to orbit the Earth, meaning the same side is always facing the Earth. The side facing away from Earth has only been seen by the human eye from spacecraft.

The Rise And Fall of The Tides on Earth Are Caused by The Moon.

There are two bulges in the Earth due to the gravitational pull that the Moon exerts; one on the side facing the Moon, and the other on the opposite side that faces away from the Moon, The bulges move around the oceans as the Earth rotates, causing high and low tides around the globe.

There is Water on The Moon!

The water is in the form of ice caught within minerals and dust on and below the surface. And the lunar water has been discovered on areas of the Moon’s surface that are in constant shadow and are hence very cold, allowing the ice to survive. The “Moonwater” was likely delivered to the lunar surface by comets.

Our Moon Has No Atmosphere.

So, this implies that the lunar surface is unshielded from meteorites, cosmic rays, including solar winds. The Moon, therefore, has huge temperature variations. The lack of atmosphere means that no sound can be heard on the Moon, and the sky always looks black.

A Man Standing on The Moon Would Weigh Less.

Our Moon has weaker gravitation than Earth. And it is due to the Moon’s much smaller mass. Therefore you would only weigh around one-sixth or 16.5% of your bodyweight here on Earth. And this is the reason why the Apollo astronauts could leap and jump so high.

Only 12 Astronauts Has Been Walking on The Moon

The Very First Spacecraft to Reach Our Moon Was Luna 1 in 1959.

Luna 1 was a Soviet spacecraft, which took off from the former USSR. The Russian spacecraft passed within 5995 km of the Moon’s surface before going into orbit around the Sun.

The Moon Has “Moon Quakes.”

The gravitational pull of the Earth creates these Moon quakes. When Lunar astronauts used seismographs on their visits to the Moon, they found that small moonquakes happened several kilometers below the lunar surface, causing cracks and ruptures. Therefore, the scientists think the Moon has a molten core, just like Earth. Unlike earthquakes that last only a few minutes, moonquakes can last up to half an hour. They are much weaker than earthquakes, though.

In The 1950s, The USA Seriously Considered Detonating an Atomic Bomb on The Moon.

This secret project was going on during the height of the cold war. It was known as “A Study of Lunar Research Flights” or “Project A119” and was meant as a show of strength when they were lagging in the space race.

The Moon is The Fifth-Largest Natural Satellite in The Solar System.

And at 3,475 km in width, our Moon is much smaller than the moons of Saturn and Jupiter. Earth is about eighty times the volume than our Moon, yet both are approximately the same age. And a popular theory is that the Moon was once part of our Earth. Furthermore, it was created from a piece that broke away due to a massive asteroid hitting the Earth when it was moderately young.

And Finally… Our Moon is The Second-Densest Satellite.

Among those whose densities are known to us anyway. And the first densest is Jupiter’s Moon named Io.

Well, that’s it. Thanks for reading this. I hope you enjoyed it. Why not head over to this interesting article: Tardigrades On The Moon – New Hope For Life in Space.