How Was Tycho Crater Walls Formed? 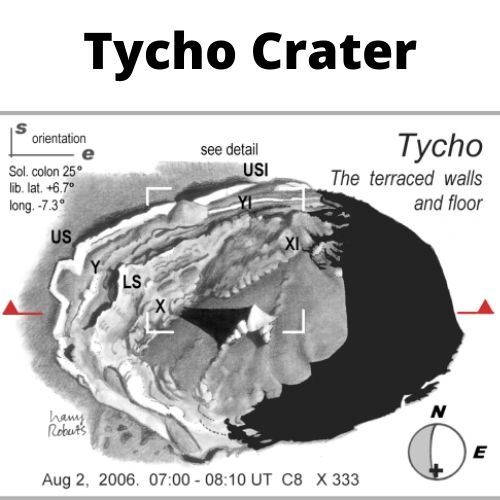 How Was Tycho Crater Walls Formed? Well, let’s find out in this short article. You will be surprised how Moon crater Tycho walls were created.

We’ve all observed Tycho crater, the largest of the newly formed craters on the Moon. It is generally agreed to be only 110 million years old (110My).

When the Moon is full, Tycho crater shows brilliant rays. Some of them stretching even across the whole visible disc. It is truly an astonishing sight, indeed, in binoculars.

Tycho crater is said to be in a pristine condition. That is, little changed since it was created. It may be one of many large impactors that hit Earth about 65 million years ago. The boulder ending the ‘reign’ of dinosaurs, but only if the dating of Tycho crater is somewhat in error.

How Were the Inner Walls of Tycho Crater Formed?

Watching closely at the inner walls of Tycho crater at high magnification, we can see a range of collapse features. How were they formed?

Impact cratering – When one object traveling at tens of kilometers per second hits another. So, the energy produced is proportional to the square of their combined velocities where energy, E = ½mv². The “squaring” of impact velocity causes an enormous energy yield: similar to a nuclear explosion.

The Tycho crater impactor, around eight km in diameter and traveling from the SW, unearthed a lunar crater about 90km diameter and approximately five km deep, probably in seconds.

The rock was either excavated, vaporized, or melted, producing a “pond” of melt that may have been liquid for quite some time. Experiments on Earth using explosives (nukes and TNT) as well as high velocity “guns” shooting small pellets into model soils have resulted in craters indistinguishable to those of the Moon.

Shortly after the initial cratering, the encircling material realizes it is no longer supported on one side and therefore collapses into the new hole. As well the impact shock has shattered much surrounding rock into smaller units, thus promoting widespread breakdown.

The crater Collapses may take various forms, and here are some we often see in our scopes (see fig).

Why is the Rim of Tycho Crater Demolished?

Collapse Formations – Loose or fractured material collapses in a landslip or slide, moving some distance across the lunar crater’s floor, settling up as a low slope, usually with rifts, low ridges, and hummocks. And, chaotic slope hummocks at the edge of a slope are termed – toes. And, in this way, the original crater rim is totally demolished.

By contrast, more consolidated rock collapses in a different way. By rotation, see Fig. And in this case, a rounded slip face forms and blocks of material slip down into the lunar crater.

And it is sometimes causing scallop-shaped divots in the original lunar crater rim. Rotational collapse results in sheerer slopes, with terraces, and scarps formations that are easily seen in small scopes. This collapse style also results in scree slopes below the scarps (Fig: crater wall model).

These characteristics are labeled in the sketch of Tycho crater’s SW wall (Fig, at the top). US-USI is the upper, or highest, scarp. LS-LSI is the deeper scarp.

So, above the lower scarp is a more or less constant terrace Y-YI. At the bottom of the wall are scree slopes X-XI that have moved some way across the lunar crater floor. With toes where the scree eventually came to rest.

Tiny craters, e.g., Linné or Birt, maintain its original rim. But in most lunar craters, the upper scarp is not the original rim that formed on impact.

Usually, that has slipped down into the lunar crater. And in Tycho maybe scarp LS-LSI; sometimes it’s fractured into loose material, confused yet?
Much of this is relatively clear in a sizeable pristine lunar crater like the Tycho crater but is more complicated in weathered older lunar craters, where formations are harder to understand.

Why is Tycho Crater a Unique Site For Amateurs?

So, the LROC ACT-REACT Quickmap application plots lunar terrain profiles. And it is used in the figure to explain the E-W section through the Tycho crater, and it’s a useful tool for hobbyists.

The terraces and scarps of the western slopes are clearly shown. But note that the software grows vertical relief by 15 times. The actual profile, Fig, plotted below, is much more subdued.

Tycho crater is a unique site for hobbyists, preserving many fascinating landforms lost in most lunar craters. And being reasonably close to the lunar limb, these formations can be observed almost side-on a much more instructive view than the aerial scenes we have for most lunar craters.

Good eyes and high magnification are required (think 50 times per inch of aperture).
In a future piece, we may go hunting in Tycho craters walls for much rarer “prey” – ponds of impact melt: seldom seen anywhere on the Moon. But on Tycho crater? Who can tell!

I hope you enjoyed this short article. Check out this interesting article: Why the Moon still matters to the world. You will be surprised.