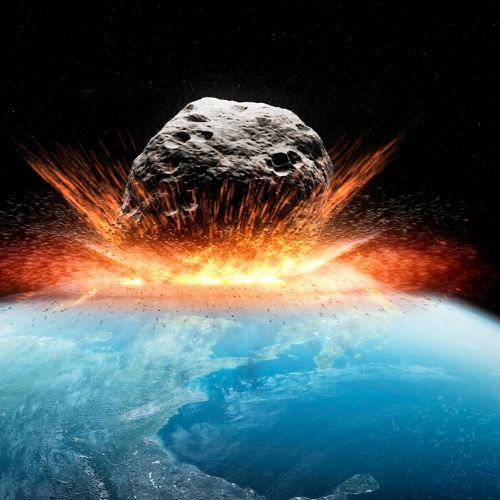 Today, most scientists think the Moon is “Earth’s child”–a huge asteroid collided with Earth and destroying our planet’s mantle sending material into orbit from which the Moon was formed. This theory would explain why the Moon’s rocks are similar to those on Earth. But can we look into our Moons past and see what really happened? Read on and find out the truth.

How Did The Moon Form?

According to the giant impact theory, the early Earth had no moon. But at some point in Earth’s ancient history, a rogue asteroid, more massive than Mars, struck the Earth in a huge, glancing strike.

Immediately, most of the rogue asteroid and a sizable piece of Earth were evaporated. The following dust clouds extended to above 13,700 miles or 22,000 kilometers altitude. There it condensed into countless dense particles that circled the Earth. As they clumped together into ever-larger moonlets, they eventually combined to form our only satellite, the Moon.

How Old is Our Moon?

By measuring the ages of Moon rocks, we know that our Moon is approximately 4.6 billion years old or nearly Earth’s age.

How Far from Earth is The Moon, and How Big is it?

Well, the distance between the Earth and its neighbor averages approximately 238,900 miles or 384,000 kilometers. And the diameter of our Moon is about 2,160 miles or 3,476 kilometers. Furthermore, the lunar mass, the amount of rock that makes up the Moon, is nearly one-eightieth of the Earth’s total mass.

Soon after our Moon formed, a huge asteroid hit into its southern hemisphere. And the massive asteroid gouged out an enormous crater. And the South Pole-Aitken basin was created. It is roughly 1,500 miles across and more than five miles deep.

The Biggest And Deepest Crater Found on The Moon

The South-Pole Aitken Basin is the biggest and deepest crater on the Moon. It is like an abyss that could easily engulf the United States from the East Coast to Texas. According to Noah Petro at NASA’s Goddard Space Flight Center in Greenbelt, Md.

The impact crashed into the many layers of the Moon’s crust, scattering that Moon rock across the lunar surface and into space. And the enormous heatwave of the impact also melted portion of the crater floor and turning it into a sea of molten Moon rock.

Sights of The Original Moon Surface is Very Rare

And that was just an initial shot. Many asteroid shelling over billions of years has left the Moon surface pockmarked with numerous craters of all kinds of sizes and covered with solidified lava, dust, and rubble. Sights of the original Moon surface, or crust, are very rare, and glimpses into the deep lunar crust are rarer still.

Luckily, a lunar crater on the edge of the South Pole-Aitken basin may present just such a rare view. It is called the Apollo Basin and developed by the later collision with a smaller asteroid, and it still measures a proper 300 miles across.

It’s like going into your cellar and uncovering a deeper hole, according to Petro. Who also states that understand the central part of the Apollo Basin may present a portion of the lunar’s lower crust.

We Can Start to Understand The Early Moon History

And if that is correct, this may be one of just a few places on our Moon where we have a glimpse into the deep Moon crust, because it’s not covered by lunar volcanic material as many other deep areas are.

Just as geologists can restore Earth’s history by examining a cross-section of rock layers exposed by a canyon, we can start to understand the early Moon history by studying what’s being revealed in Apollo Basin.

Petro and his partners at NASA’s Goddard Space Flight Center in Greenbelt, Md made the discovery with the (M3) or Moon Mineralogy Mapper, a NASA instrument onboard India’s Chandrayaan 1 lunar orbiting spacecraft.

And, analysis of the light spectra in pictures from that instrument showed that portions of Apollo’s interior have a similar composition to the impact melt in (SPA) or the South Pole-Aitken Basin.

How Was The Original Lunar Crust Created?

So, as you go farther and deeper into the Moon, the lunar crust holds minerals that have more volumes of iron. And when our Moon first was formed, it was mostly molten. Minerals carrying heavier elements, such as iron, sank down toward the lunar core. And minerals with much lighter elements, like potassium, silicon, and sodium, floated to the top, creating the original Moon crust.

The Asteroid That Created The South Pole-Aitken Basin

The huge asteroid that created the South Pole-Aitken Basin probably carved through the lunar crust and possibly into the upper Moon mantle. The asteroid impact melt that solidified to form the central floor of the South Pole-Aitken Basin would have been a blend of all those Moon layers. We assume to see that it has slightly more iron than the bottom of Apollo Basin since it went deeper into the lunar crust.

Apollo Basin Has More Iron Than The Surrounding Moon Highlands

This is what we found with Moon Mineralogy Mapper. Furthermore, we also see that this area in Apollo Basin has more iron than the surrounding Moon highlands, indicating Apollo Basin has revealed a layer of the Moon crust between what is typically seen on the lunar surface and that in the deepest craters like the South Pole-Aitken Basin.

Both the South Pole-Aitken Basin and Apollo Basin are thought to be among the oldest of the Moon’s craters. All this based on the vast number of smaller lunar craters superimposed on top of them. As time passes, old Moon craters get covered up with new ones. Therefore a lunar crater count provides a relative age. A Moon crater riddled with new craters is older than one that looks relatively clean, with few craters overlying it. And as new craters form, they break up the lunar crust and create regolith. It is a layer of broken-up rock and dust, like soil on the Earth.

Although the Apollo basin is old and coated with regolith, it still gives a valuable glimpse of the lower lunar crust. Because the tinier meteorite impacts that create most of the Moon’s regolith don’t scatter the material very far.

Furthermore, calculations of how the regolith forms show that at least fifty percent of the regolith is locally derived, according to Petro. So although what we see with Moon Mineralogy Mapper has been ground up, it still mostly represents the Moon’s lower crust.

This is a Window Into The Violent Youth of Earth

It’s very likely Earth wasn’t spared the abusive asteroid attacks experienced by our Moon. Large craters on other worlds crossed the solar system, including Mars and Mercury, show the rain from the heavens was widespread. However, on our own planet, the record of these events was smeared out a long time ago. The crust gets reused by plate tectonics and exposed by rain and wind erasing ancient impact craters.

The research was supported by NASA’s Discovery Program. The Discovery Program is a group of Solar System exploration missions funded by NASA or US National Aeronautics and Space Administration by its Planetary Missions Program Office.

Well, that’s it. Thanks for reading. And if you want to know more about our Moon, then head over to this interesting article: Moon Facts – Interesting & Strange Facts About The Moon.