Astrochemistry And The Moon 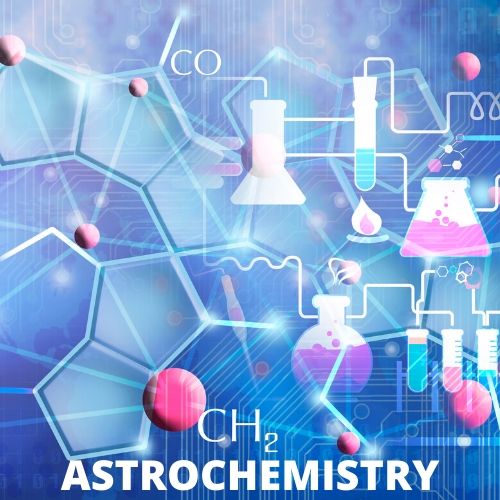 Astrochemistry is the science and study of the reactions and abundance of molecules in our Universe, and their interaction with the radiation. The discipline is an overlap of chemistry and astronomy.

Astrochemistry includes the use of telescopes to measure different aspects of space, such as their composition and temperature.

Findings and conclusions from the use of spectroscopy in chemistry laboratories can be employed in concluding and resolving the types of molecules in astronomical bodies, for example, a star or an interstellar cloud.

So, the different characteristics of molecules show in their spectra, yielding a unique spectral representation corresponding to a specific molecule.

So, What is Actually, Astrochemistry?

As mentioned above, astrochemistry is the study of the chemical elements observed in space.

Yet, on larger scales than the solar system, especially in molecular gas clouds, the study of their interaction, formation, and destruction results.

As so, it represents an overlap of the disciplines of chemistry and astronomy. On the solar system scale, the study of chemical elements is regularly called cosmochemistry.

Does The Moon Have an Atmosphere?

There’s no air to breathe on the Moon; there are no breezes to make the flags planted there by the Apollo astronauts flutter.

However, there is a thin layer of gasses on the lunar surface that can almost be called an atmosphere. Technically, it’s considered an exosphere.

Furthermore, the small amount of atmosphere the Moon consists of some rare gases, including potassium and sodium and, is not found in the atmospheres of Earth, Venus, or Mars.

Earth-based spectrometers have detected potassium and sodium, while the Lunar Orbiter detected radioactive isotopes of polonium and radon. Lately, scientists even found that water molecules smaller than a micrometer could survive on the Moon’s surface.

So, the total mass of those lunar gases is about 55,000 pounds or 25,000 kilograms, approximately the same weight as a loaded dump truck.

The cold temperatures mean the atmosphere falls to the ground every night, just to be kicked up by the solar wind in the coming days.

What Are The Sources For The Moon’s Atmosphere?

One of the Moon’s atmosphere’s sources is outgassing, the release of gasses from the lunar interior, usually due to radioactive decay.

Outgassing episodes may occur during moonquakes. And, after being released, lighter gases escape into the vacuum of space almost immediately. Outgassing replenishes the thin atmosphere.

Furthermore, the impact of sunlight and the solar wind and micrometeorites hitting the lunar surface can also release gases buried in the Moon soil. This is a process called sputtering. Those gases either bounce along the lunar surface or fly off into space. Sputtering may demonstrate how water ice accumulates in lunar craters.

So, comets peppering the Moon may have left some water molecules on the lunar surface. Some of the molecules then stored in shaded polar Moon craters, creating beds of solid lunar ice that some engineers and scientists have discussed mining for future human astronauts.

The Dangers of Moon Dust

The lunar atmosphere and the Moondust can have severe consequences for astronauts planning to travel to the Moon because the Moondust stripped Apollo spacesuits threadbare. So, knowing the material floating in the Moon’s atmosphere should help space exploration programs to design and create the next generation of lunar equipment and spacesuits.

Apollo astronauts reported the Moondust as abrasive, gritty, and clingy. It can wreak havoc on computers and equipment. Moonwalkers were coated in it, and their spacesuits were nearly threadbare when they returned back to Earth. Much more will need to be discovered about Moondust before NASA returns its astronauts to the Moon.

Titan the biggest Moon of Saturn and the second-largest natural satellite in our own solar system, Titan is the only Moon identified to have a dense atmosphere, and the single known body in space, other than the Earth, where clear proof of stable bodies of surface liquid has been found.

Saturn’s Moon Titan intrigues scientists because of its dense atmosphere, which mostly made of nitrogen gas and its liquid methane and ethane oceans. Titan’s atmosphere is thicker than Earth’s, and it’s the only other body in our solar system with huge amounts of liquid on its surface.

Why Does Saturn’s Moon Titan Have an Atmosphere?

The dense atmosphere roiling on Saturn’s biggest Moon, Titan, may come from organic matter baking inside the Moon’s center. The Moon Titan interests scientists because of the Moon’s thick atmosphere, which is, as stated before, mostly is made of nitrogen gas and its liquid methane and ethane oceans.

On July 20, we will celebrate 51 years since commander Neil Armstrong uttered the famous phrase -That’s one small step for man, one giant leap for mankind, as he stepped out of the lunar lander called the “Eagle,” and onto the lunar surface.

Neil was the first human to set foot on our only satellite, but he wasn’t the last. Buzz Aldrin stepped out only 19 min after Armstrong. And, NASA wishes they will become two of many when the Artemis Moon program successfully performs a new cargo of astronauts, the first woman, and the next man to the Moon’s south pole.

So, that is the new challenge set forth by the current administration, which intends to make the Artemis Moon program a reality by 2024. In the meantime, NASA also has ideas to build a small space station that would circle the Moon by 2023.

If you are fascinated by the moon landing and would like to remember the events of Apollo11 and Apollo Program half a century ago, you are in for a real treat. While researching Apollo 11, I came across a website called Apollo11Space. Check it out and find more interesting facts about this historic mission.

Well, that’s it. Thanks for reading this article about Astrochemistry. I hope you found it interesting.